.Spare a thought today for Mary (Fatemeh) Mohammadi,  an Iranian Christian who has received a suspended sentence of three months and one day in prison and 10 lashes for “disturbing public order.” 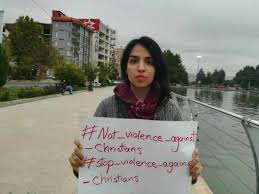 Mary (21) was arrested on 12 January near Azadi Square in Tehran during protests following the downing Ukrainian International Airlines Flight 752 by the Islamic Revolutionary Guard Corps of Iran. She was physically and emotionally abused during her arrest and transfer to Qarchak prison. For several weeks her whereabouts were unknown, causing friends and family much anxiety.

Mary was released on 26 February on bail of 30 million Tomans (US$ 2,000) pending a court hearing. Initially scheduled for 2 March, it was postponed until 14 April due to the COVID-19 outbreak.

Mary reported that the judge questioned her about her faith, even though this had no bearing on the charges she faced.

On 21 April, Mary was notified of her sentence. In her Instagram account she comments on why she was convicted:

“Because of protesting against the slaughter of human beings, Because of showing sympathy for the families of those who perished on the Ukraine airline crash, Because of defending the rights of all humans, Because……. There was no evidence against me, so I ought to have been acquitted, but instead I was sentenced not only to imprisonment, but also flogging.”

Iran’s leadership needs to understand that until it respects and upholds fundamental freedoms, such as freedom of speech and the freedom of religion and belief, it will be regarded as a pariah State. A great country and great people deserve so much better than this.