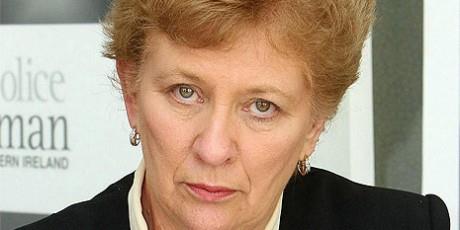 Read Lady O’Loan’s moving account of why she  believes we cannot be indifferent to the right to life of the child in the womb:

And Hear Why Both Lives Matter…

Lady O’Loan’s Bill to ensure conscience rights for medical practitioners completed Day One of its Committee Stage on March 23rd:

The Bill will clarify the law to ensure conscience protections are in place for medical practitioners to protect them from discrimination, enabling them to fully participate in their chosen professions and care for patients to the best of their ability. The Bill will give the right to withdraw from end of life treatment, activities under the Human Fertilisation and Embryology Act and abortion.

Under the existing law, some medical professionals are not protected from unjust discrimination. GPs, as well as many nurses, midwives, pharmacists, and other medical professionals have limited statutory conscience protection. As a result, some areas of the healthcare profession are becoming increasingly difficult places to work for those with certain deeply-held moral, philosophical or religious views. Not only is this discriminatory, it could also mean healthcare professions will become increasingly less diverse, inclusive, and representative of the views of the general population.

An Inquiry in 2016 found that some doctors and nurses face discrimination in the workplace due to their conscientious objection to practices that they believe end a human life.

The conscience rights of midwives were also undermined by a 2014 Supreme Court judgment, which held that the conscience provision in the Abortion Act 1967 did not allow them to refuse to engage in aspects of abortion such as telling someone else that have to carry out an abortion.

A recent ComRes poll found that a majority of the public oppose forcing doctors to participate in abortion procedures against their will if they want to remain in their profession.

“No one should be coerced by the risk to their careers into violating their conscience, and it is plainly inconsistent with the principles of equality legislation to exclude whole sections of society from areas of medical employment simply because of their moral beliefs. Reasonable accommodation of conscientious objection is a matter both of liberty and equality: of individual freedom and social inclusion. It is promising to see support from across the country for the Bill”.

Mary Doogan, one of the two midwives in the Greater Glasgow Health Board v Doogan & Anor case, and spokesperson for the www.freeconscience.org.uk campaign said:

“It’s reassuring to see this Bill is gaining momentum and continues to progress through Parliament. This Bill will restore the conscience rights of those who work tirelessly day in and day out to serve and care for others. As medical professionals, we owe patients not only our efforts but also our best moral judgement, and this Bill would allow us once again to practise with the greatest integrity. I fully support this important legislation and commend it to Parliament and the wider public”.

“I am heartened to see that this Bill is progressing through Parliament, as it is necessary and much needed. There is a pressing need for statutory conscience rights which actually protect those who need protection. The current law fails to do this, so this Bill is a necessary and timely step.”

Originally posted on DavidAlton.net: Legislate for Life At 7.30pm on Thursday 25th of January in Belfast, Lord (David) Alton will be giving a talk entitled “Legislate for Life” at St Brides Hall, 38 Derryvolgie Avenue, Belfast BT9 6FP . All welcome. On January 26th The House of Lords will debate Baroness (Nuala) O’Loan’s new Bill…

via 8,894,355 reasons why Ireland should continue to uphold the sanctity and dignity of every human life – because both lives matter. Count The Missing People. Baroness O’Loan poignantly Explains what lies behind her Bill to protect workers sacked for refusing to collaborate; What Ireland’s Former Taoiseach Has To Say In Opposing Anti-Life Attempts To Repeal the 8th… — DavidAlton.net 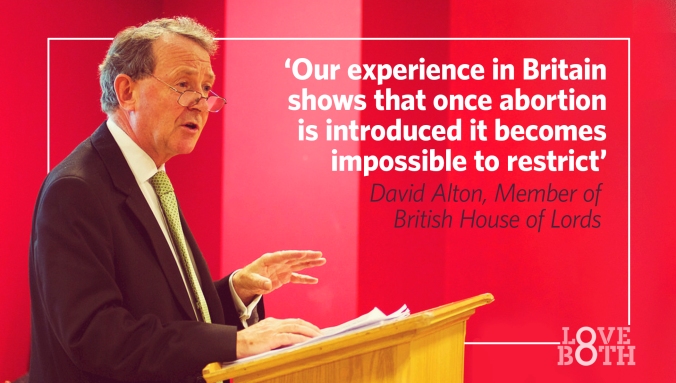