Lord Alton of Liverpool asked the following Parliamentary Question:
To ask Her Majesty’s Government when, and how, they intend to respond to the projection by the Government Office for Science that plastic in the ocean is set to treble by 2025. (HL6530)

Lord Gardiner of Kimble, the Department for Environment, Food and Rural Affairs, has provided the following answer to your written parliamentary question (HL6530):

The Future of the Sea report shows that tough global action is needed to protect our oceans and marine life, and the UK is leading the way by tackling plastic waste. That’s why our 25 Year Environment Plan stated our ambition to eliminate all avoidable plastic waste. We want to be the first generation to leave our environment in a better state than we found it.

We have recently introduced one of the world’s strongest bans on harmful microbeads in rinse-off personal care products, and have now commissioned the Hazardous Substances Advisory Committee to review the evidence on microplastics in leave-on cosmetics and domestic cleaning products, and their chances of reaching our seas and causing harm to marine life. We will review our position in light of their advice.

Our 5p carrier bag charge has taken nine billion bags out of circulation. A beach clean survey in 2016 reported a 40% reduction in the number of plastic bags found. We will consider extending this charge to small retailers, exploring whether compulsory options are needed if voluntary agreements prove ineffective.

Single use items are a major issue for marine litter and frequently in the top 10 of items found during beach cleans. In his Spring Statement, the Chancellor launched a call for evidence seeking views on how the tax system or charges could reduce the waste from single use plastics.

We will introduce a deposit return scheme to increase recycling rates and slash the amount of waste polluting our land and seas, subject to consultation later this year.

As marine litter is a transboundary problem we also work productively with other countries to address it, particularly through the Oslo and Paris Conventions for the Protection of the Marine Environment of the North-East Atlantic (OSPAR), G7, G20 and the UN Environment Programme. 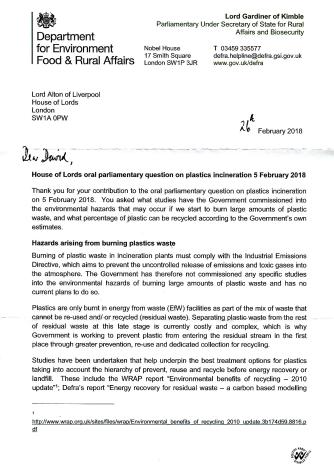 My Lords, what studies have the Government commissioned into the environmental hazards that may occur if we start to burn large amounts of plastic waste, and what percentage of plastic can be recycled according to the Government’s own estimates?

My Lords, following considerable investment, there are now about 40 large municipal waste plants. They are highly regulated by the Environment Agency precisely to ensure that we recover energy and, importantly, they also operate within all the emission tests. I do not have the precise figure for what is currently recyclable but I will write to the noble Lord. However, the whole essence of our objective is to cut the amount of plastic in circulation and to reduce the variety of plastic so that we can recycle ever more. 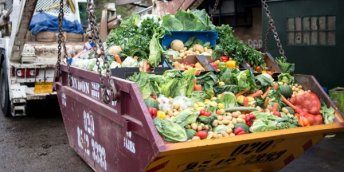