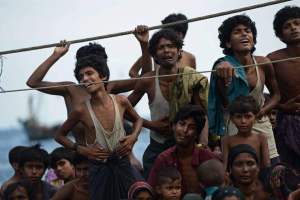 Rohingya migrants stand and sit on a boat drifting in Thai waters off the southern island of Koh Lipe in the Andaman sea on May 14, 2015. The boat crammed with scores of Rohingya migrants — including many young children — was found drifting in Thai waters on May 14, according to an AFP reporter at the scene, with passengers saying several people had died over the last few days. AFP PHOTO / Christophe ARCHAMBAULTCHRISTOPHE ARCHAMBAULT/AFP/Getty Images

Baroness Anelay of St Johns, the Foreign and Commonwealth Office, has provided the following answer to Lord Alton of Liverpool’s  written parliamentary question (HL45) about the Plight of Burma’s Rohingya Muslims
Question:
To ask Her Majesty’s Government what assessment they have made of the circumstances faced by Rohingya refugees; what action they have taken to encourage the international community to support these refugees; and, in particular, what discussions they have had with the…