Tuesday June 25th, 2013 marks the anniversary of the outbreak, in 1950, of the Korean War. On July 27, it will be the sixtieth anniversary of the Korean Armistice Agreement, signed in 1953. Over those three bloody years around three million people were killed – including 1,000 British servicemen, more than in Afghanistan, Iraq and the Falklands combined. …read the rest of this article at the foot of this page…

Ann Shin, who made the movie The Defector, gave a recent talk in the British Parliament and screened the film. The meeting was attended by parliamentarians, human rights activists and several North Korean refugees now living in the UK. Ms.Shin provided links to The Defector along with links to some similar documentaries: 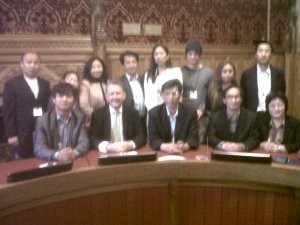 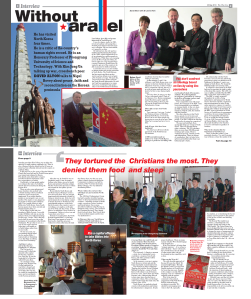 Join the 101,000 people who have watched “Vanish The Night” by Ooberfuse – which pleads from liberty and freedom in North Korea. Members of the band attended the screening of The Defector and their song, which features the voice of Shin Dong Hyok, pleading “do not forget us” was played :

North Korea at a crossroads:

BBC World At One Interview about North Korea

Article for The Church of England Newspaper

Tuesday June 25th, 2013 marks the anniversary of the outbreak, in 1950, of the Korean War. On July 27, it will be the sixtieth anniversary of the Korean Armistice Agreement, signed in 1953. Over those three bloody years around three million people were killed – including 1,000 British servicemen, more than in Afghanistan, Iraq and the Falklands combined.

At the end of the war, at the 38th Parallel, a militarised wall was erected, dividing the peninsula. The Communist north became an isolated Stalinist State – replete with its own purges, reign of terror, and gulags – and the south a military dictatorship. Years of dangerous aggression and acts of provocation have followed – and while the south has evolved into a vibrant, thriving, democracy the northern dynastic dictatorship is known for its nuclear tests, a missile launch which cost £500 million, a vast standing army, egregious abuses of human rights and mass starvation.

Sixty years after the signing of the Armistice, the north remains formally at war with the south and with the United States. They have even managed to so antagonise their powerful Chinese neighbour that Beijing has taken to casting its Security Council vote with the United States, both censuring Pyongyang and supporting the imposition of further sanctions.

For Britain, the war with North Korea ended in 2001 when we created diplomatic relations and exchanged ambassadors.

In 2003, after a speech I made in the House of Lords highlighting the degrading conditions in the north’s prison camps – where 200,000 people are held and 400,000 people have died in the past 30 years – the North Korean Ambassador in London called me and protested. This led to Baroness (Caroline) Cox and I travelling to North Korea to see the situation first hand, to the subsequent formation of the Parliamentary Group on North Korea, which I chair, and to the publication of several reports which Lady Cox and I have authored.

We have patiently attempted to create dialogue without appeasement; to undertake constructive but critical engagement; and to make human rights abuses a central concern. For the first time in many years the north and south have just held some face to face talks. It’s what we have been calling for.

I have now been to North Korea on four occasions and also to the River Tumen crossing in northern China where many defectors lose their lives, shot as they try to escape from a country where the 1990s famine took the lives of 2 million and where there are reports of malnutrition and even cannibalism.

At Westminster I have chaired regular sessions, taking evidence from escapees. Their accounts are recorded in the book, “Building Bridges – is there hope for North Korea?” – which I have written with Rob Chidley, and which is published by Lion.

“Building Bridges” also tells the story of Korea’s 8,000 Christian martyrs and recounts the courageous role which the churches played in leading the south to democracy. It tells the story of Robert Jermyn Thomas who took bibles to Korea and was executed; how his executioner became a Christian and how, at the place where he died in Pyongyang, there is a new university founded by a South Korean Christian, Dr. James Kim – the story of which is nothing short of miraculous.

It tells the story, too, of another event sixty years ago: the largely forgotten story of a group of Christians seized by the Communists and taken on an epic forced march.

Marched from place to place, they were given starvation rations, and frequently left exposed to the elements.

They included the Catholic Bishop, Patrick Byrne, and 76-year-old Mother Beatrix, the provincial superior of a community of French Carmelite nuns – who both died on the march; the Anglican Bishop, Cecil Cooper – who survived ; the Reverend Charles Hunt; members of the Methodist mission; Herbert Lord, head of the Salvation Army in Korea; and a clutch of South Korean politicians.

When Commissioner Lord protested that many of the group were elderly or infirm “…but they will die if they have to march” the Korean major responded “Then let them march until they die.” And most of them did.

Fr. Philip Crosbie, an Australian priest, one of the few who lived, later wrote:

“And so I came to freedom…. …All this I prize; but I have gained a still greater and more precious freedom. It is the freedom to believe in God and openly profess my faith.”

“Building Bridges” was written to ensure that these stories of great sacrifice and suffering are not forgotten but also to inspire and challenge its readers to get involved and to pray and work for much longed for change in North Korea.

David Alton is an Independent Crossbench Peer; is Professor of Citizenship at Liverpool John Moores University; was a founder of Jubilee Campaign; and is Chairman of the All Party Parliamentary Group on North Korea.

One thought on “Building Bridges – Links to Interviews, North Korea Freedom Week, Ooberfuse, and Ann Shin’s “The Defector” shown in the British Parliament – and mark the anniversaries of the Korean War”