What did Pope John Paul I, Dietrich Bonhoeffer, Edith Cavell, Dag Hammarskjold, Jose Rizal, and the fictional Maggie Tulliver all have in common? Put another way, if you were marooned on Roy Plomley’s mythical desert island, and told that you could take The Bible and Shakespeare as companions, what one other book might you choose?

The answer and common denominator to both these questions is “The Imitation of Christ” written in the fifteenth century by Thomas a Kempis, who died in 1471. It is the most widely read devotional book after the Bible. There are over 2000 counted editions – over 1000 of which are preserved in the British Museum.

Although, surprisingly, Thomas a Kempis has never made Blessed, canonised, or declared a Doctor of the Church, he has had an amazing impact on the lives of singular and diverse men and women.  Many have found inspiration and consolation in the writings of this self effacing German monk. The stories speak for themselves.

Jose Rizal was the Filipino polymath and national hero, who, in 1896, aged 35, while awaiting execution by Spanish soldiers, read the book before his execution at Intramuros prison in Manila.

In 1945, Dietrich Bonhoeffer had the book in his cell the night before the Nazis led him, naked, into the execution yard where he was hanged with thin wire by strangulation.

It was the only book found in the case of Dag Hammarskjold, the Swedish diplomat who became Secretary General of the United Nations and died, in 1961, when his Douglas DC-6 crashed in Zambia.

One hundred years earlier,  Mary Ann Evans, writing under the male pseudonym, George Eliot,  published her “Mill on the Floss”. Maggie Tulliver is the principal protagonist.  In her loneliness, the fictional Maggie Tulliver, receives no consolation from Byron or Scott but stumbles on a threadbare copy of an old book and, as she reads, it is “as if she had been wakened in the night by a strain of solemn music telling of beings whose souls had been astir while hers was in a stupor.”  In stumbling on  “The Imitation” Tulliver enters a period of intense spirituality and renounces the world.

During World War One the book was special, too, for Edith Cavell, a British nurse and devout Anglican, who helped 200 allied soldiers escape from German occupied Belgium. Cavell was captured, sentenced to death, and shot by firing squad. She was quoted as saying, “I can’t stop while there are lives to be saved”. On the day of her execution she inscribed a message to the man she loved in her copy of Thomas a Kempis’ classic.

Closer to our own times, in 1978,  it was reported that “The Imitation” was the book which Pope John Paul I (Albino Luciani) had been reading in the Vatican at the time of his death; and it was the book which my friend James Mawdsley asked for when he was imprisoned for more than a year by the Burmese military junta.

“The Imitation” was also admired by St.Ignatius of Loyola, by St.Thomas More, and by the Trappist

monk, Thomas Merton.  The slave trader, John Newton, composer of Amazing Grace, and the great John Wesley both said that “The Imitation” had influenced their decision to become Christians.

Although Thomas’ own existence was away from the frenetic busyness of life, yet he understood the besetting temptations and foibles of life. As a monk,  he delighted in devotional exercise, composing spiritual works and painstakingly copying the Bible – a task he undertook on four occasions.  He was insistent that “If, however, you seek Jesus in all things, you will surely find Him.”

He wrote “The Imitation” in Latin while living in the Netherlands – although, in keeping with emphasis he placed on humility and the anonymity which he craved (we should “love to be unknown”), he wrote the book without proclaiming his authorship.   He insists: “Do not ask, “Who said this? But pay attention to what is said.”

In times of trouble I have always found Thomas a Kempis a great comfort and refuge. Not only does he understand our capacity for great failure but he is always restorative. He is not self righteously judgemental, narrow or bigoted, hectoring the weaker brethren. He is an encourager who proclaims the authentic Christian creed of love:

“Love is a mighty power,
a great and complete good.
Love alone lightens every burden, and makes rough places smooth.
It bears every hardship as though it were nothing, and renders
all bitterness sweet and acceptable.”

“Nothing is sweeter than love,
Nothing stronger,
Nothing higher,
Nothing wider,
Nothing more pleasant,
Nothing fuller or better in heaven or earth; for love is born of God”

Although he believes that ultimately “man proposes, but God disposes” this is not to be read as an excuse for shrugging off our responsibility to act.

Thomas a Kempis tells us to put our love into action, not to throw in the towel at the first obstacle, but to persist in what we do: “At the Day of Judgement we shall not be asked what we have read, but what we have done…..Those who love stay awake when duty calls, wake up from sleep when someone needs help; those who love keep burning, no matter what, like a lighted torch. Those who love take on anything, complete goals, bring plans to fruition … But those who do not love faint and lie down on the job.”

“The Imitation” teaches us how to form our character and teaches us to have a passionate love for the man made in God’s image. In contradiction of our contemporary temptation to denigrate and belittle others he says “It is great maturity and wisdom to think nothing of ourselves, and to think always well and highly of others.”

At its conclusion,  “The Imitation” moves from the mystic dialogues, advice on the inner life and spiritual consolation to hard-wired practical advice about how to sustain our faith, particularly by becoming regular recipients of the Sacrament, enabling us to enter into full unity with Christ and to feel His Real Presence in our lives.

From this snap shot, you can see why Thomas a Kempis has inspired so many – and why you shouldn’t wait until you are marooned on a desert island to read it.

You can listen to the first part of “The Imitation”. It can be downloaded free at http://www.booksshouldbefree.com/book/the-imitation-of-christ-by-thomas-a-kempis 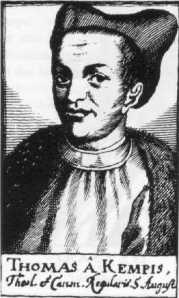 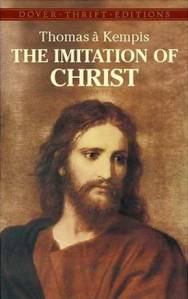